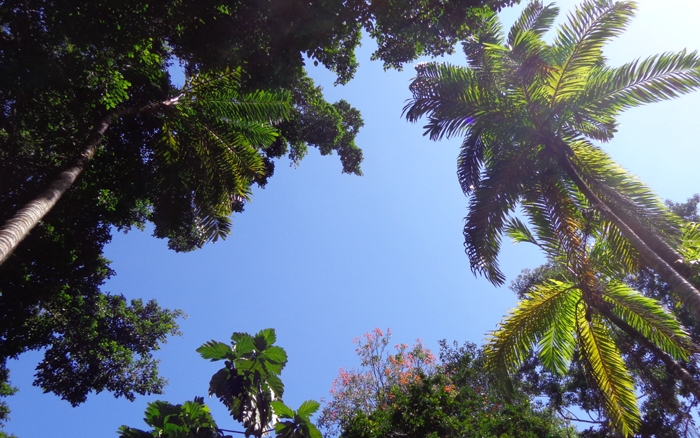 One of our early impressions of Costa Rica. Looking up in the back yard at ‘our’ house.. The temperature was generally around 29 C

In late January 2015, my husband Shane and I left North America for the first time in our lives. We were looking for a much needed rest, a break from the great white north and all of the concerns that running 3 businesses entails. It was a better decision than we could have imagined. For over a month we had nothing scheduled and only ventured out when we felt like it. Often we discussed the idea of certain excursions only to have them pre-empted by a good part in a book, or a drawing to finish! Or a much desired nap. Shane had only read one novel in his life. On this trip, he read five more!  Time felt like it had slowed right down to a manageable pace. We had never experienced any thing like it. 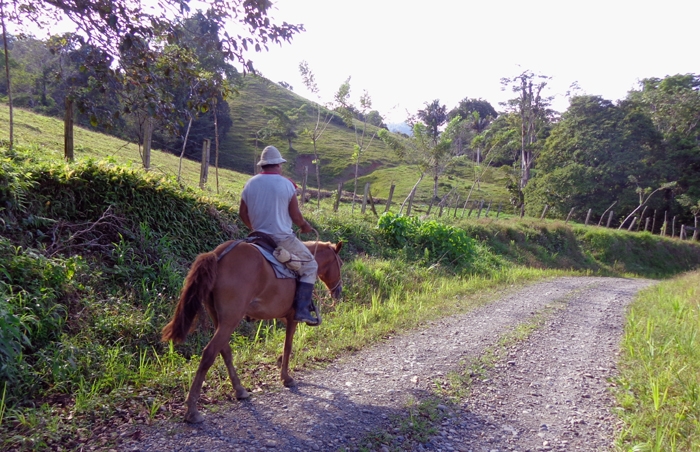 A friendly farmer who lives up the mountain on the same road as ‘our’ house.

This is not to say that we only lazed around, though. Local people showed us their favourite spots, assisted us with some minor challenges, showed us how to identify and prepare foods found in the jungle, introduced us to some of the neighbours.  We drove down obscure country roads, explored many a beach and nature preserve. 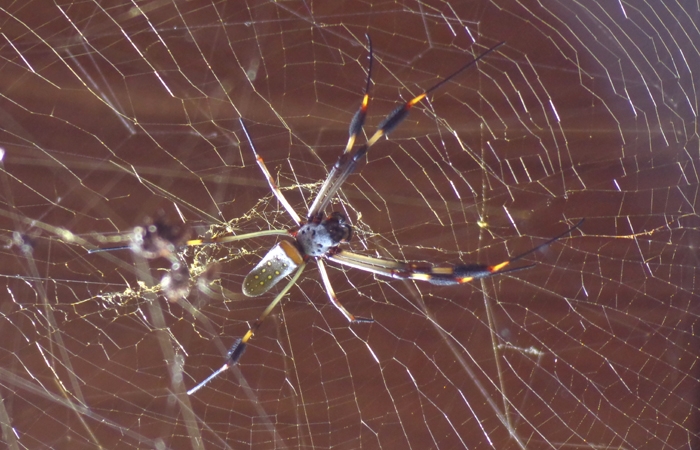 This big little guy made himself at home under the eave and took care of a few critters for us. He stood still and let me draw him in my sketch book. 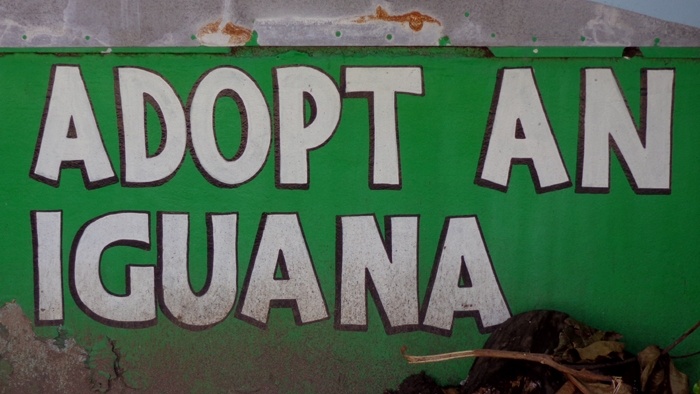 Many people in Costa Rica are concerned about the animals and there are several rescue and animal sanctuaries, conservation parks in the area.

We saw lots of wildlife, but did not come home with any great photos of it. My first and most unpleasant encounter with wild-life were the cock roaches because I had left a sealed bag of nuts in the kitchen. Always having despised beetles for some reason, I freaked! I learned quickly how to not give them any reason to come around. Shane sensed my angst over these critters and kindly ‘handled’ them for me. We had poison dart frogs join us on the patio and cute little lizards visit us in the house. They were no bother. We had heard there were dangerous snakes in the bush, but thankfully only saw one tiny yellow snake during a walk in a National Wild life park. Dogs were as ubiquitous as I imagine the sacred cows in India to be, often lounging in the middle of our path, not caring to move. So we drove or walked around them. Three of them befriended us and would not be discouraged from hanging around. 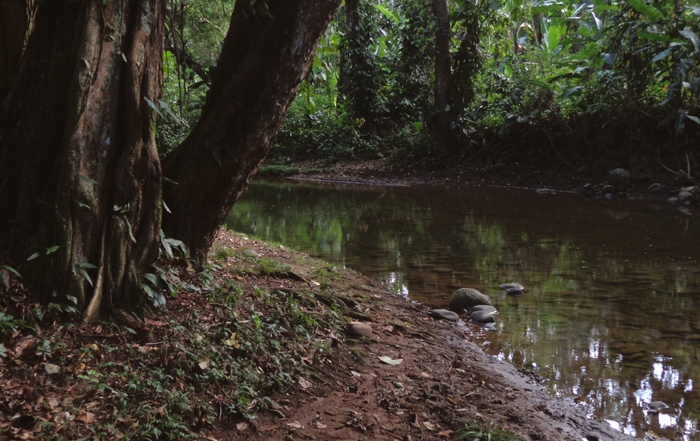 There are a great many rivers and creeks in the area. I never did get to see a proper waterfall, though. Something saved for next time!

Saying that it is wet there, is quite an understatement. The air is wonderful and sweet most of the time. But we did not enjoy crawling into bed and feeling like the sheets were wet. The jungle takes ‘rainy day’ to a whole new level. We tried to measure the rainfall amounts, but it came down with such force that it would bounce right out of the bucket… and it was not even the rainy season yet! We were amazed and pleased that we received only a total of 6 mosquito bites while were were there. 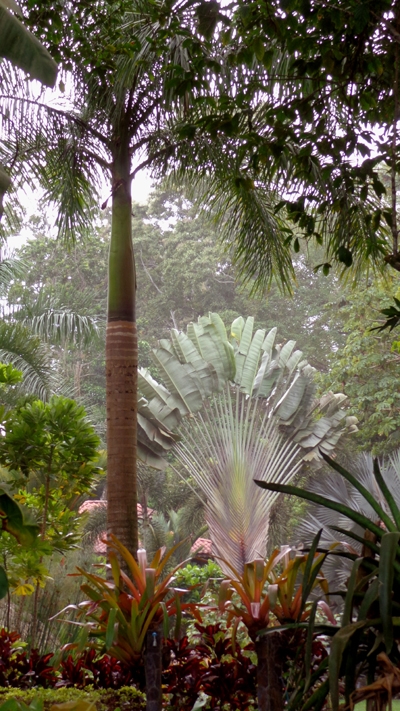 The vegetation is amazing! The rainy days still exhibit a lot of colour and texture.

We thought it would be quiet out in jungle country. I was amazed by how boisterous the atmosphere was! We really enjoyed the howling monkeys and the strange sounding birds, but the almost daily chainsaws and gas powered weed eaters were not what we expected. The almost constant chirping of the cicadas, the ginormous fig tree dropping its fruit on the uninsulated tin roof and the animals or birds scuttling about on same tin roof in the middle of the night added quite a bit to the decibels. It often sounded like someone was trying to break in. We did get used to it after a while.

I was fascinated by the heliconia, a large, fleshy type of flower that grows wild everywhere. There are many different varieties! 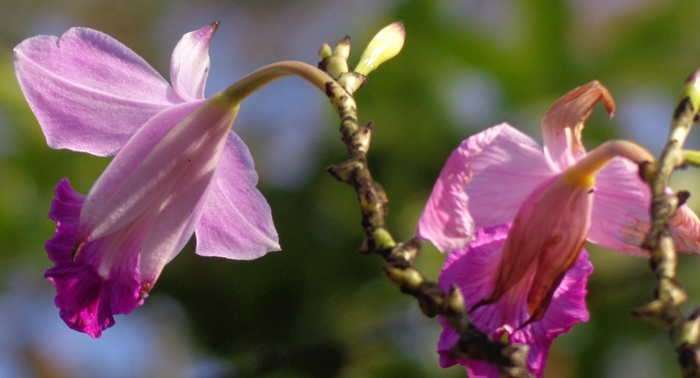 Orchids! These grew much differently than I ever expected. They were almost shrub-like.

The variety of plant life there is absolutely stunning! I don’t think I could ever tire of seeing our house plants growing in the ditches and hillsides. That was the first thing I noticed, loving plants and flowers the way I do. I also noticed that the forest is constantly shedding, almost like it does in Alberta during the autumn season. Shane said that it seemed like it was an exceptionally gorgeous fall day because of all the leaves that were falling. 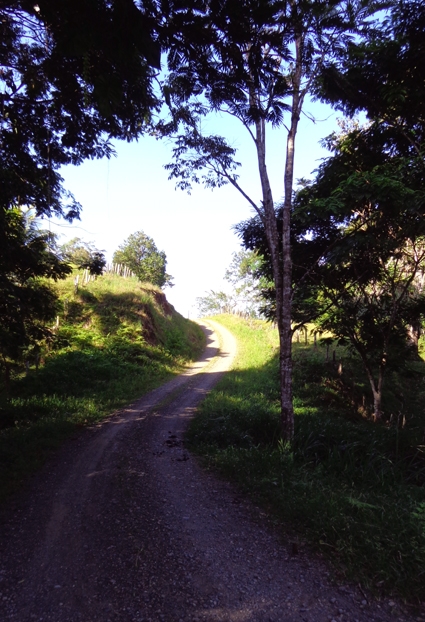 Typical mountain road. One of the many drives we took with our little rented 4×4. You can see how dark the shadows are.

It is very dark in the jungle at night and quite dark on cloudy days as well, especially inside the house. Living so close to Edmonton, we don’t get the same level of darkness at night. Because of the huge trees there is also a lot of shade. It took me a while to get used to the darkness, that was something I had also not expected. 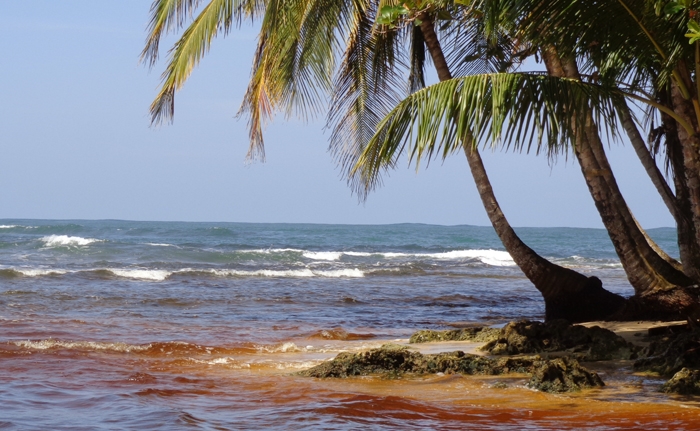 This was taken near the Manzanillo conservation area. The brown colour comes from the tannin released by the vegetation in the fresh water streams that eventually run into the ocean.

The beaches are the loveliest I had ever seen, not that I have seen very many. Each one differs in the color of water, or the color and type of sand, the strength of the waves, the scenery and the type of people who hang out there. Some of them, the locals liked better and some were filled with a greater proportion of tourists. Many beaches were wild, ungroomed and there was no one around but birds and butterflies. 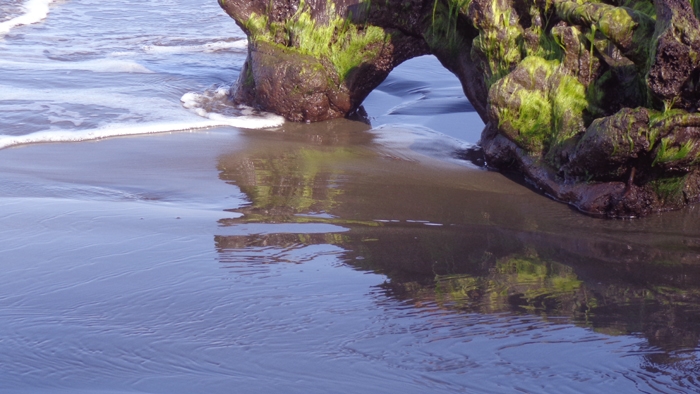 I loved the shapes and colors in this scene. Perhaps this photo and many others will inspire a painting someday! Soon. 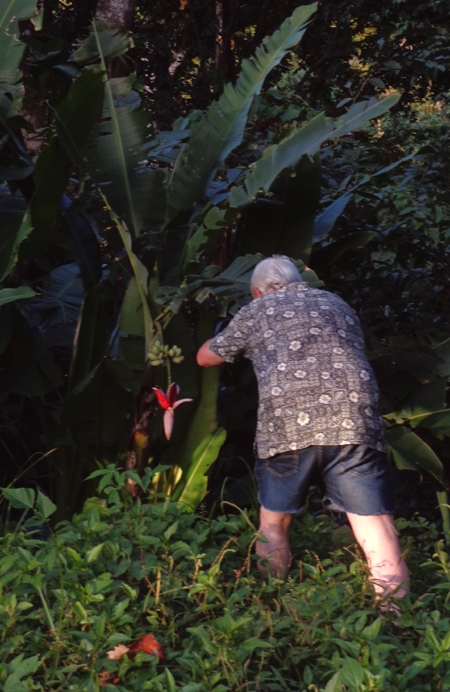 Even my husband, Shane found many things photo worthy. He is usually more interested items of a mechanical nature.

Overall, our trip to Costa Rica was one of the best things we have ever done and left quite an impression on us. It probably added a couple of years to each of our lives! It will be interesting to see what effect it will have on my art practice.

6 thoughts on “Impressions of Costa Rica”