When would be a good time for me to sneak away? Kidnapping some time for myself had been on my mind for quite a while. There is always so much happening on the farm during spring and summer that it felt like a break was long overdue. Where could I go that would be quiet and comfortable enough for me to accomplish a few things of my own and also get in some R&R? After some focused thought on the question, a sweet little plan emerged! 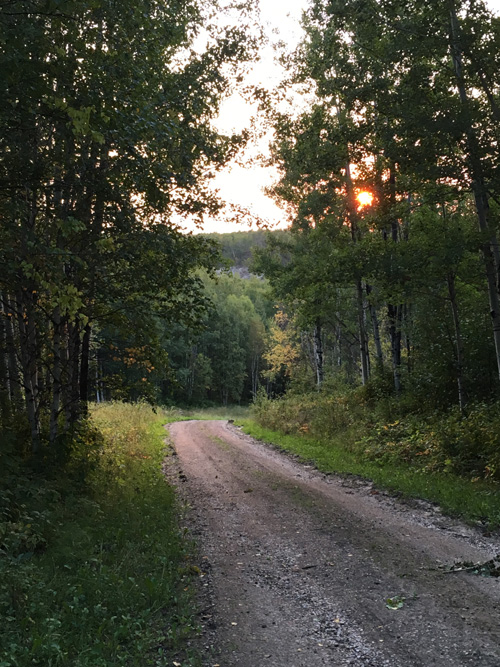 The kind of solo getaway that I dream about. Just me and nature!

It’s about kidnapping some time!

At least 20 years had passed since I had gone away for some solo time. Being somewhat of an introvert, this type of kidnapping some time is something I often dream about. My daughter, Jilene, encouraged me to take the idea seriously and not just let it slide as I tend to do. Since Shane (my husband) had recently gone on a four day fishing trip with his buddies and a couple of out of province auction sales, my thinking was, “Fair is Fair”. I made a deal with him and he didn’t seem to mind the idea of me leaving everything behind for a little while. Besides, what could he really say? Our daughter would look after meals and our son would be working on the farm with his dad. He’d be fine.

What is an Artist in Residence?

Throughout the years, I had heard about artist in residence programs. but had never applied for one. I knew many artists who had taken advantage of such opportunities and they reported coming away from the experience with more confidence and growth in their art practice. This is kidnapping some time with a defined purpose. These Artist -in-residence programs exist to invite artists, and all types of creative people for space away from their usual environment and obligations. They provide time for reflection, research, presentation and/or production. For some reason, I always felt like the whole concept was too much of a commitment for me.

“So why not set  up an ‘artist in residence’ of sorts, for myself?”, I thought. A kind of informal one, but where there are no forms to fill out, no competition with other artists for the opportunity, or the need to travel a significant distance? 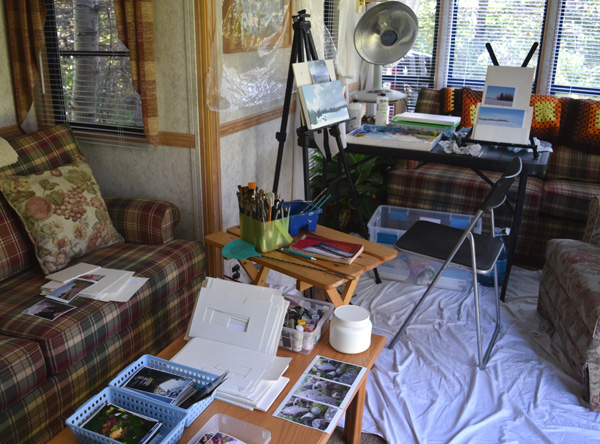 This is my makeshift studio in the living room of the park model trailer that I stayed in during my solo getaway.

For eight magical days at the end of August and beginning of September, I stayed at a beautiful,  private campground. This little piece of paradise on the Pembina River was owned by a long time family friend. She offered me her cozy park model trailer to stay in and all I needed to bring was my own food, bedding, and art supplies. Perfect!

Adding some purpose to my proposal

In order to make the most of my time there, I set certain goals for myself. One of them was to climb the approximately 1/2 mile, 30% grade road that led down to the river at least once a day. After all, sitting and painting for hours on end was not good for my mind or body. It was pretty tough, but I managed to make this trek twice a day on every day but one. Having no reliable cell phone signal down by the river was enough motivation to get me up that hill and do the promised daily check in with my family. 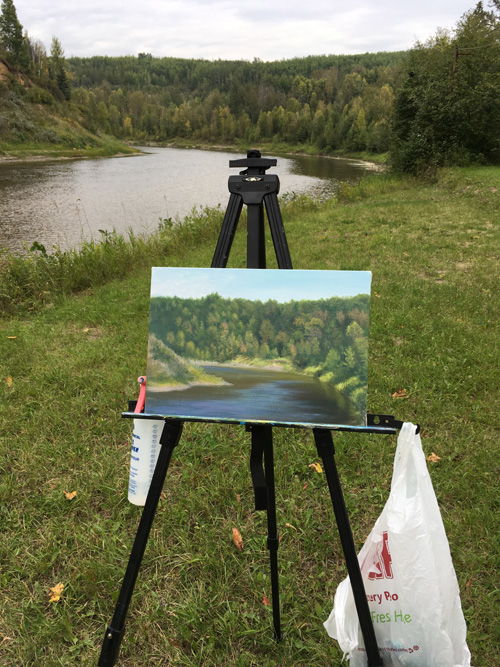 The light has changed drastically since beginning this painting. I will have to rely on memory to finish it. It took me 2 hours painting time to get to this point in the process.

Another goal was to attempt a ‘plein aire’ painting of the river.(Photo above) This is a good skill to practice but for which there seems to be no time at home. I also wanted to paint as many paintings as possible, get some reading and writing done and immerse myself in nature. As usual, I had much too long of a to-do list…..

Shortly after arriving on Sunday evening, I set up my makeshift studio. There was plenty of room to spread out and start organizing painting possibilities. So many ideas, so little time; not a new problem. But how exciting! A couple of small paintings were started before leaving home so that it would be easier to get back into the creative flow. I worked on these the next day. What a treat it was to think and paint without interruption! Later that first day, I began to peruse all of the possibilities and became rather overwhelmed until I focused on the concepts that sparked the greatest amount of excitement for me in that moment.

In need of power

A large diesel generator provided the electricity a distance away from the trailer. For the first half of my stay, I ran the generator in the late afternoon and evening to charge my phone, keep the fridge cool enough and have the lights on for painting at night. But it was rather unsettling to go out into the bush in the dark to shut down the generator, so I decided to have it run earlier in the day. Living so near the city and the airport, I am no longer used to such dark nights. It was eerie and I was surprised by my reaction. Instead, I read by candle light and solar lantern after dark. One night, I began a miniature painting using only an led headlamp for light. It was interesting experiment that I would not recommend. It’s a good thing acrylic is a forgiving medium! 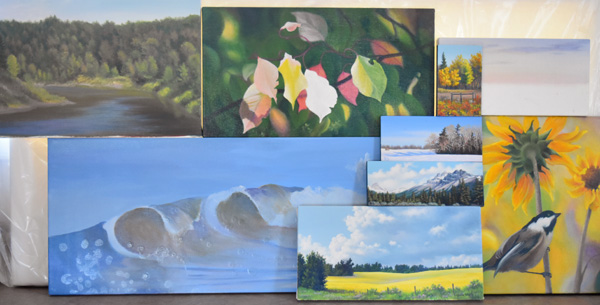 Every morning, I could not wait to go and see what the river was up to. Such a scene does not exist near my home, so it was rather special and seemed to change daily. Then off I would go, on a little trek in my rubber boots down some of the many bush trails with camera in hand. I ended up taking just about 200 photos! I ate very little, did no cooking nor tidying up until the very last day there, when I did a thorough cleaning. Most days, the owner would come for a pleasant but short visit to check on what was new. In the late mornings and afternoons, I would paint my heart out.

Three miniatures and a small painting were completed and 4 others had a good start. Of course, it would have been more satisfying to have completed more paintings. Every night, I would read by candle light, in complete silence, except for the sounds of nature and cattle bawling occasionally. No tv, no news all week! It was heaven!

Part of the obligation that often comes with Artist Residencies is that the artist is asked to give something in return for their stay. Often the participant will create an art related community outreach project, put together an art show and invite the public or create a public art piece etc.. In this case, I offered to give the owner a painting as a Thank you gift for the use of the space and she was pleased with the prospect.

Should I go home?

At the end of seven days, going home was a mildly interesting idea. I began to miss my family. The weather was cooling down so much that I could see my breath in the air before getting out of bed in the morning! I was also running out of food…

It would be nice to try kidnapping some time again, but possibly for longer. I was rather surprised to be feeling a bit tired at the end of my stay.  Maybe expecting so much from myself is not that wise. Can I ever learn to relax? That remains to be seen. 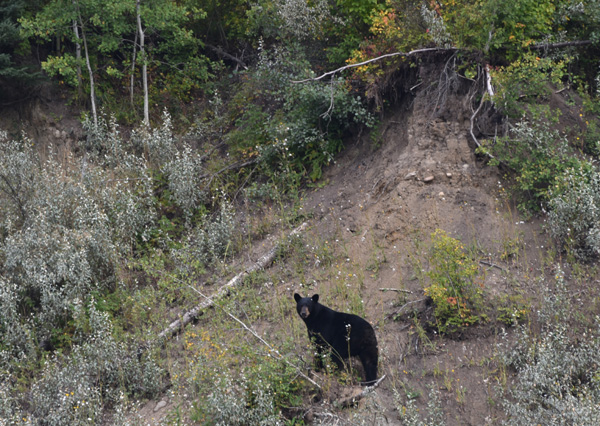 I met a neighbor, directly across the river from where I was staying. Glad we did not meet up on one of the trails. The owner suggested I carry a bell, just to be safe.

6 thoughts on “Kidnapping Some Time”