Here I go again, on another side show as something else has come along to take time away from the easel for at least a few years. But this is an important side show! It’s time for art to move over and make some room for dirt. To make room for dirt is going to take up lots of time and energy. 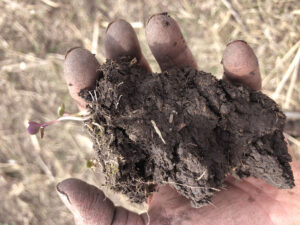 A sample of soil (dirt) that will be sent to the lab for analysis.

You may have already heard something about what I have chosen to tackle. Currently, I am taking an online soil biology course which teaches how to build healthy soil using natural processes. If done correctly, the theory goes, we will be able to discontinue the use of inorganic fertilizers and toxic herbicides as well as pesticides to grow our crops. This will make us and the land healthier and save us a lot of money, hopefully sooner rather than later.
We are really hoping this works, because the path we are on now is pretty destructive with the use of so many chemicals. There seems to be more of it used every year as each year goes by. And the pattern appearing is that the results promised from all of these costly inputs are not being realized on our land.

Our farm and the general health of those who apply the chemicals, those who are exposed to the spray drift as well as the environment depends to some extent, on this experiment turning out well. But focusing on a new subject complete with microscope and test tubes, turners, tanks and apple corers means that my art has to take a bit of a back seat for a little while. It’s going to take a fair bit of time to make the necessary changes and do the testing to make sure we’re on the right track. The results will tell the truth in the end.

This lovely landscape may not look unhealthy, but it is actually quite degraded and chemically dependent. It is beginning to show the effects in the lack of yield and input costs which keep rising.

I was not looking for another distraction when this fell into my lap. Being a sensitive type of person, I would feel badly whenever the sprayer was put to use and even called it our ‘weapon of mass destruction’. Whether or not this is an over dramatization depends on where you stand. But I could not say too much to my farmers against their methods because I had no alternative way of doing things. All of a sudden this course showed up. I couldn’t even tell you how that happened. So far, what has increased is my vocabulary and understanding of natural systems, at least according to Dr. Elaine Ingham, who is the instructor. Since being exposed to this different way of thinking, I am also delving into books, podcasts and youtube videos from a variety of researchers and experienced presenters.

I have done better at the course than I thought possible, passing each module with distinction. Especially since it has been 39 years since I was in school! Who’d a thought I was such a geek? Some of it is quite technical but I am really enjoying it. I will keep you posted on how the experiment goes. Wish us/me luck! It may take an awful lot of work to implement in the beginning, but it sounds promising. All we can do is give our best shot.