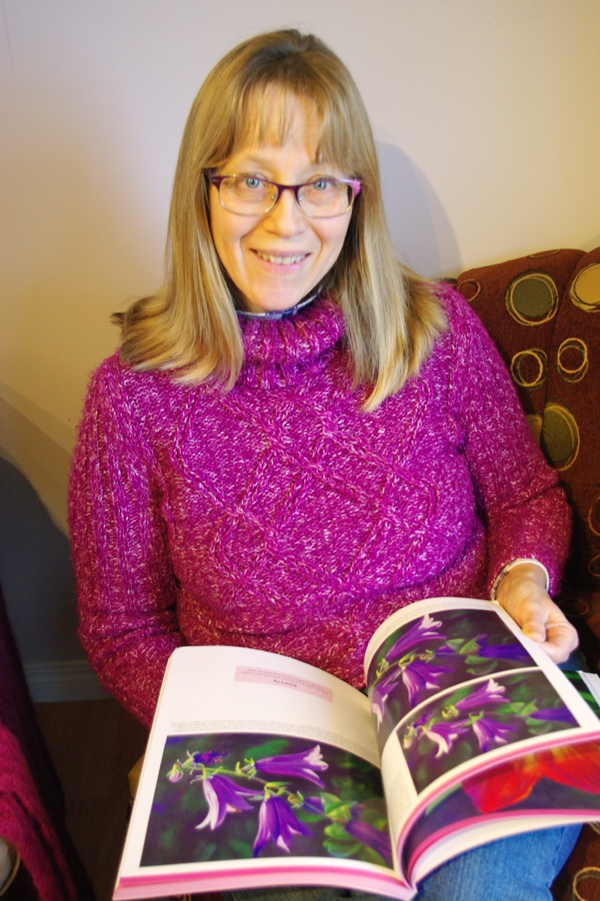 My work has officially been published in a fancy book!!
Almost a year ago I was approached by the Walter Foster Company to be a contributing artist for their new painting instruction book, “The Art of Painting Flowers in Oil & Acrylic”. One of the editors found my work on a photo sharing website called Pinterest, which is in itself a miracle, given the millions of photos and artists that post on the site. Never having done anything like this before, I had envisioned, that  a number of mistakes requiring a series of do-overs would be made. They were a great company to work with and had only asked for minor revisions to two of the four painting projects that were requested. Turns out that it was a lot of fun and I learned so much about the whole process of creating step by step instructional material, consistent photography and the absolute need for clear communication among other things. Figuring out how it is that I do what I do and articulate it in writing, was probably the most difficult part.
In mid-October a dozen of these books arrived unexpectedly. They were due in mid-November so it was a wonderful crown on top of an already great day!!

Until I opened the book…..

Low and behold, there was a full page print out of an orange tiger lily that I had painted as one of the projects for people to follow. It was really neat to see it in this beautiful, glossy full color book. As I was drinking it all in, suddenly I discovered a glaring error in the photo. On one of the last steps for creating this painting I had supplied a photo of how to use painters’ tape to decide on the placement of a leaf that was not in the reference photo. This piece of tape, plain as day flaunted itself at me in what was suppose to be the finished piece. Oh well, the rest of it should be fine. I’ll get over it. Continuing through to the end of that project, there it is again!! That piece of painters tape, large and naked as can be, sitting on the last photo of the tiger lily painting where the final step was suppose to appear….. wow. Ok. And to think that this was one of the projects that I was asked to re-work….

The next project looks good! What a relief! it is a multi- colored pansy and it is satisfying to see how it came together. I can forgive the tiger lily fiasco.

I then turn the page and … oh no! They flipped the next project completely on its side. Well that’s strange and also disappointing since the photos were submitted to them right side up. Hmmm. Most people would not notice, I suppose, except for avid gardeners. Otherwise it is not terrible, except that the design is less striking and maybe a bit confusing with it oriented the wrong way. It’s time to make supper so I put the book down and mull over whether or not I should say anything to the publisher. I kind of chuckle about the whole thing and try to recall if the editor had sent me proofs that were somehow missed in all of my busy-ness.

After supper, I am curious about the rest of the book and what the other artists had presented. There is a wide array of styles and techniques portrayed, which should be helpful to new and intermediate painters. On the last page of the book the artist’s biographies appear alphabetically and I set about reading them in order. Looks like there are some well-established and accomplished artists included in this book, and it feels good to share the space with them.

My biography is list listed second to last and I set about reading it as well.
What? Why does it sound so strange? Did I write this? I don’t remember writing this. It seems juvenile and lists details that are not at all pertinent for an international audience. Checking the original file that was sent to them, I see that the whole thing was re-written without my knowledge. Ok, now I had better talk to the publisher….

One thought on “A Momentary Disappointment”