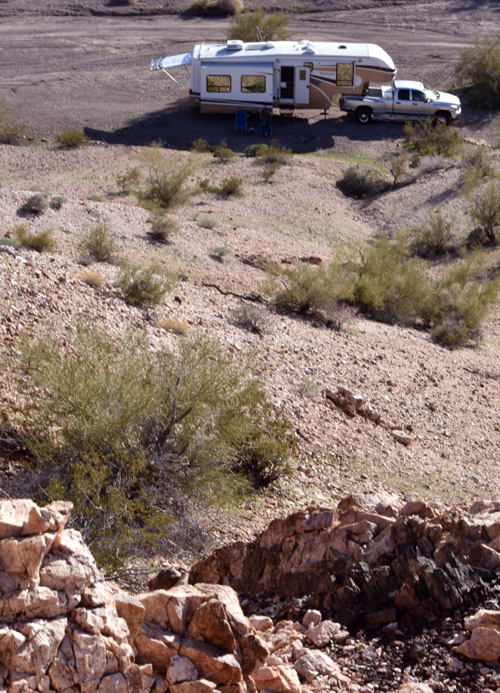 Glamping out during our inspiring winter getaway in the desert near Lake Havasu City Arizona.

Shane and I hit the road with our truck and fifth wheel trailer on January 28 and headed south for Yuma Arizona. It was plus 5 degrees Celsius when we left home but the weather got colder the further we traveled. He was hoping the weather would warm up much sooner. Fifteen hours later, Shane finally decided it was time for some shut eye.  We had reached Idaho Falls around 1 am, where the temperature was minus 24 degrees Celsius and snowing! Maybe we were going in the wrong direction?

The furnace in the trailer was turned on and we both crawled into bed still wearing our clothes. I didn’t even take off my winter coat! This is not the first time we have slept in the trailer on a cold night. On one trip, we awoke to a snow drift in the bedroom of our trailer….on my side….  It was not quite as bad this time, but it still took me quite a while to warm up and settle in to sleep. As usual, Shane was snoring as soon as he hit the pillow. Parking in a truck stop over night has it’s perks. One of them being noisy diesel engines that can serve as an alarm clock. Thank goodness for my earplugs! We were up and on the road again by about 6 am.

The highways were in good shape and we made it to Lake Havasu City the next night. We thought we’d just camp out in the Walmart parking lot at the northern edge of town, since it was already 9 pm. It has become well known in RV circles that Walmart welcomes short term campers, so this idea is not unusual. But it is something that does not sit well with a growing number of municipalities. Shortly after we arrived, we were approached by a security guard who told us that we were not allowed to park there over night. He was very nice about it and gave us a card with info about other places we could stay.

One suggestion that the guard gave us, was to head north for a mile to find the entrance to a government owned free campground in the desert. It was pretty dark and we almost missed the driveway. Down a really curvy, narrow gravel road we slowly drove. With really huge boulders gleaming in the moonlight, crowding in on the narrow path, Hubby was getting a bit nervous. What have we gotten ourselves into? Even a pro trucker like Shane can’t necessarily turn a big rig around in a tight spot in the dark. As we went along this cow-trail, we noticed a few Rvs parked along the sides and managed to find a spot that was in a more open area to settle in for the night. 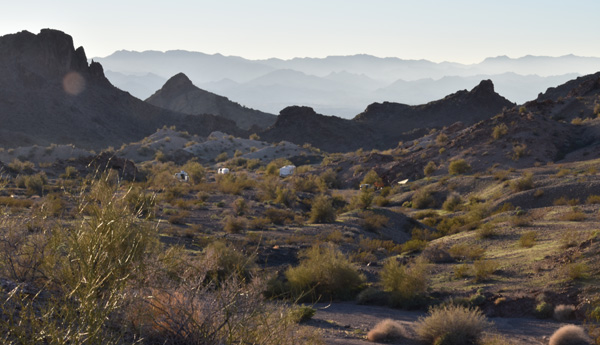 Glamping in the desert near Lake Havasu City.

The next morning, we were greeted with warm sunshine and the colorful desert wilderness. Shane and I decided to hang around for a few hours because it was so quiet and peaceful, but we had no food or water to speak of. A trip back to Walmart was in order; to gather a few groceries, water, and maybe look up a neighbor friend who was supposedly staying at an RV resort in town.  Since we needed to fill our water tanks, we thought it best to find that RV resort and stay there for a night or two, depending on how much we liked it.

On the way out of this campground we saw how truly beautiful this place was. The rock formations and desert plants were so inspiring and it was fun to think about sitting in the desert and painting what was in front of me. An activity I rarely have time to do on the farm.

Are You Kidding Me?

Finding the RV resort we were looking for, we decided to check and see if there was room there for us, even though our friend had already left for Alberta. It was right on the shores of Lake Havasu and was a pretty nice looking place. We had never parked in an RV resort before and had no idea what it was like. Truck stops, Shane’s parent’s place in Yuma and Alberta campgrounds were about the extent of our glamping experience.

We were asked by a friendly gate attendant to park in a special lot and go into the office. After answering some of our questions, the office clerk asked what year our trailer was.  Shane told her that it was a 2005 model. “Oh… well, then we will have to inspect it first. There shouldn’t be a problem,” she said.   What??

The manager returned from his inspection and told us that if we were only staying one night, then it was ok for this time only. If we wanted to stay in their resort again, the decals on our trailer would have to be replaced. They were beginning to fade and crack… After all, this is a five star resort….
Interesting. We had never heard of such a thing before!

Seventy-two US dollars a night seemed a bit steep in our opinion, so we decided to just try one night for the heck of it. We needed water, a shower and a proper supper anyway. Turns out, we didn’t think it was really worth it because the RVs were packed in like sardines, it was quite noisy and the promised internet was crappy to boot.

Shane and I decided that the desert was much more our style, even without hookups. So guess where we went the next night?  Our friends would not have been the least bit surprised 😉