Even with our best laid plans, curve balls can appear out of nowhere , as we all know. 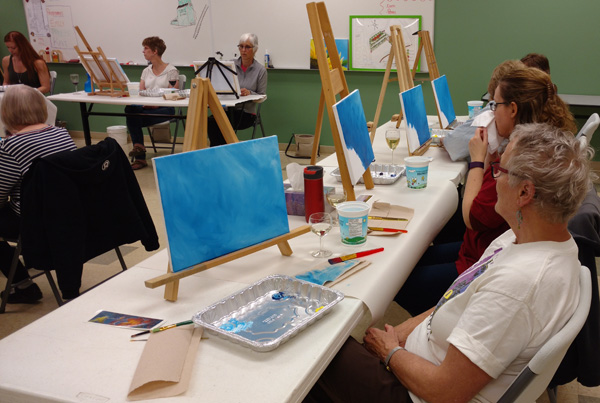 This was the first step in the process. Some of the ladies were happy with their backgrounds and were waiting for further instructions. )Photo Thanks to Jilene Schafers)

Paint Nights have been a popular activity in the last couple of years. I had been wondering recently, what it would be like to put one together. How challenging would it be? Could I pull it off successfully?

Using skills to help others

The St. Albert Urban Agriculture group was looking for a fund raiser to purchase the plants and materials needed to expand the community food forest. Since growing food is something I love to support, it was an easy fit for me to pitch in and facilitate a Paint Nite event for them. But, I had never instructed one before. I had not even attended such an event! I had no idea about what I was getting into….
It was exciting to think that some of my skills could be used to help others and help me grow at the same time. This would be a push out of my comfort zone, put me in front of a new audience, help grow my experience, and exercise my problem solving muscles. I knew that coming up with a simple, quick painting would be a bit tricky. A painting the size of the one I was offering for the paint nite normally takes around 20 hours for me to finish. I tend to get totally lost in the process and time doesn’t usually matter that much….The time-frame for everyone to complete this project was approximately 2.5 hours!

The first thing I did was to sketch out a few possible design ideas. The criteria was that the image had to be colorful, have a pleasing composition in a garden theme, and be simple enough for unpracticed painters to create.
Checking out paint parties on the internet and talking to people who had attended similar events really helped to wrap my mind around how to make this as good an experience for the participants as possible. Writing down lists for supplies and methods of approaching the project really helped me to get started. It also helped to have some recent teaching experience.
More cost effective ways to paint would have to be explored because artist quality materials are quite expensive. Using supplies unfamiliar to me, meant that it would be important to use the exact same paints and brushes etc. as the attendees were going to be using. I had to understand fully how everything worked and how to solve the problems that might arise ahead of time.

It was also important to incorporate as many environmentally friendly features into the project as possible. Consideration was given not only to the cost of supplies ( to leverage fund-raising efforts) but what would happen to the used resources afterwards? Leftover paint would be scraped into a container for use later in my studio; recycled paper towels were sought out and dollar store brushes would be carefully cleaned for re-use. Used paint water was to be collected, brought home to settle in a pail, and later taken to the eco station. Because they are easily recycled, tin foil pans were chosen for the paint palettes. All of the packaging materials would be recycled as well as the paper covering the tables. As little plastic as possible was used for the project.
These environmental efforts by no means take care of the waste and footprint problem perfectly. But, they are an attempt, at least, in the right direction.  I felt that this way of doing things would also fit with the concerns of the group I was serving as well as my own.

The best laid plans come together

Initial Paint Night ideas that I didn’t really like.

I painted a couple of my design ideas, but was not thrilled with any of the samples that came from those efforts. Searching for another simple, but colorful spring inspired concept was challenging. One evening in my studio, I turned around and noticed the miniature painting on my windowsill which had been completed a few weeks earlier. Why not try that design with a few changes?  The event organizers decided that this was the most exciting project I had submitted. The only problem was that it took me longer than 2 hours to paint…. I had to practice this painting 3 times over in order to find shortcuts and the best way to demonstrate the method.

A friend volunteered to come over and be my guinea pig. We had a great time and it only took about 2 hours and 15 minutes to coach her through it. That would have to do, it should all work out great! Little did we know that life would throw a slight curve ball the evening of the event….

Ways to lessen the stress

Having everything loaded up a few hours ahead of time made for a lot less stress!  I am learning not to leave things to the last minute….
My daughter, Jilene and our friend and event organizer, Jill, would be my assistants during the event. We we pretty sure that we had thought of everything. Even hair dryers to speed up paint drying time, just in case. Jill and Jilene would make sure everyone had enough supplies and refreshments (wine!), answer questions and help clean up. I would concentrate on the painting part. All the bases were covered.

As we all know, even with our best laid plans, curve balls can appear out of nowhere. Shortly after we had arrived to set up, the venue’s caretaker asked what time we would be packed up and ready to leave. At the time, I thought this was a rather strange question. We told him that we should be finished with everything by around 9 or 10 pm. He  mentioned that he thought we would be done by around 8:30 pm and that he was expected at another event by 9 pm. This was stressful news! We  requested and had been approved to use the space until about 10 pm.
An hour less would really rush everyone’s painting experience which was what I wanted to avoid. Later we found out that there was a miscommunication with the person who recorded the booking. A lesson learned in double checking the details! 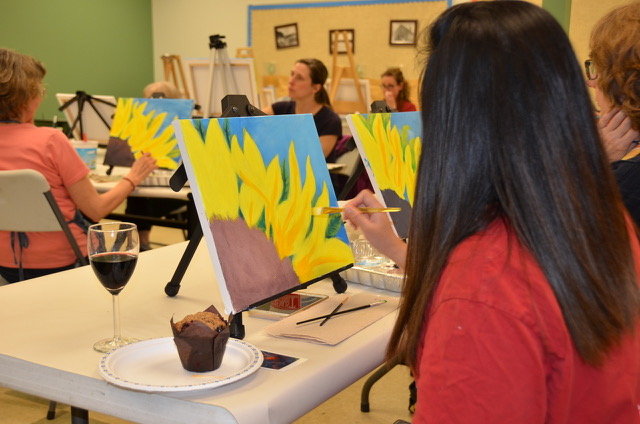 Half way through the project, with wine and treats to compliment the evening! (Photo Thanks to Jill Cunningham)

No time to over-think

Pictured here are most of the paint night participants. Despite the time challenges, their paintings turned out great!(Photo Thanks to Jill Cunningham)

These Paint Night attendees were a tremendous group of ladies! After explaining our dilemma, they were really good about it. Our rushing through did lessen the enjoyment for some, and some did not get their painting finished the way that they had hoped, but it all worked out ok. Someone commented that there was no time to over-think anything! Many of them we so kind as to help pack up the supplies and bring it to my van. With their help it took only about 15 minutes to get out of the space so that the care taker could meet his next obligation. Once home, Jilene and I had quite the mess to sort through; a few hours of scraping paint and cleaning brushes!

In the end, it was a great experience. Would I do it again? Well since I have a decent design and most of the ground work figured out…. You might twist my arm.