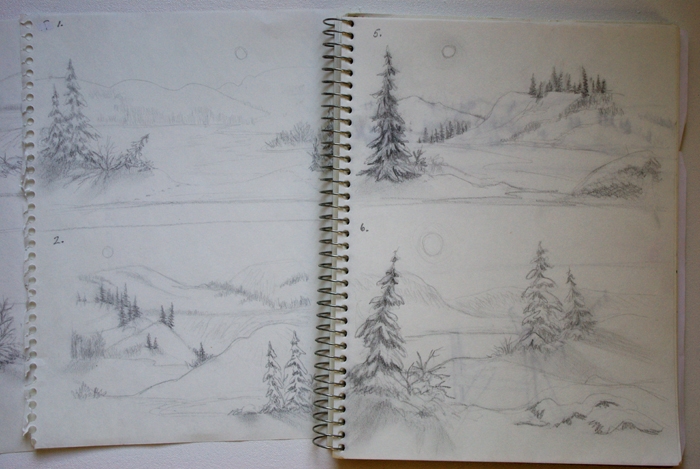 Above are a few of the pencil sketches that were drawn to work out some possible ideas for the painting.

Sometimes an artist is asked to create something that expresses someone else’s idea. I have done this before, but this time, it was different.

Last summer, a couple were excited about an idea they had for a painting that depicted beautiful moments from their past. They approached me to paint a large custom ‘moonlight shining on the snow’ scene with a verbal description of the possible image. It was unclear to me what that painting could look like as they didn’t have any photos for me to work from.

Painting a moonlight night scene presented an unusual challenge for me as I had never done that before.  After a bit of research and several sketches, some concrete ideas began to form. The client had sent some autumn daylight photos of a location that was special to them and gave me free reign over which ones to use, if any. This was also a bit of a challenge because I am used to working within specific perimeters when it comes to producing a painting for someone. But it was fun at the same time because I could make things up as I went along.

Shortly after completing the drawings, I painted one of the designs (compositions) on a small canvas to work out what the colors might look like.  It turned out alright, but it might not be dark enough. Or maybe it was too simple or too blue…. 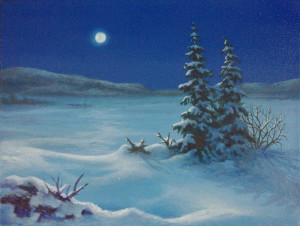 This is the first trial painting that I did, described above.

That was another question: how to get a night scene dark enough, but yet light enough so that one can actually see it from across a room? I spent quite a bit of time studying how a landscape looks during a winter night under a full moon. I had to really pay attention and noticed that everything was some shade of grey. There may have to be some color embellishments to make the painting more interesting. I studied what trees looks like in the distance and close up, how much detail can be seen and what the shadows look like. It was quite an education! 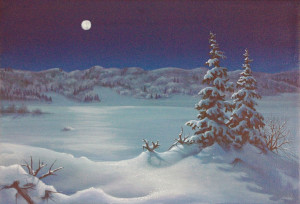 Slightly larger and differing in color and detail, above is the second trial painting.

After emailing the photos to the clients, they responded with excitement that I was on the right track! What a relief!! This is why I always do ‘preliminary’ paintings before tackling the final, usually much larger piece. There were a few changes for the final painting which was to be 24 by 36 inches. Oh, and why not add the big dipper to the sky? More research ensued once the final painting neared completion. Did you know that the constellations change their orientation in the sky according to the time of year? Fascinating! 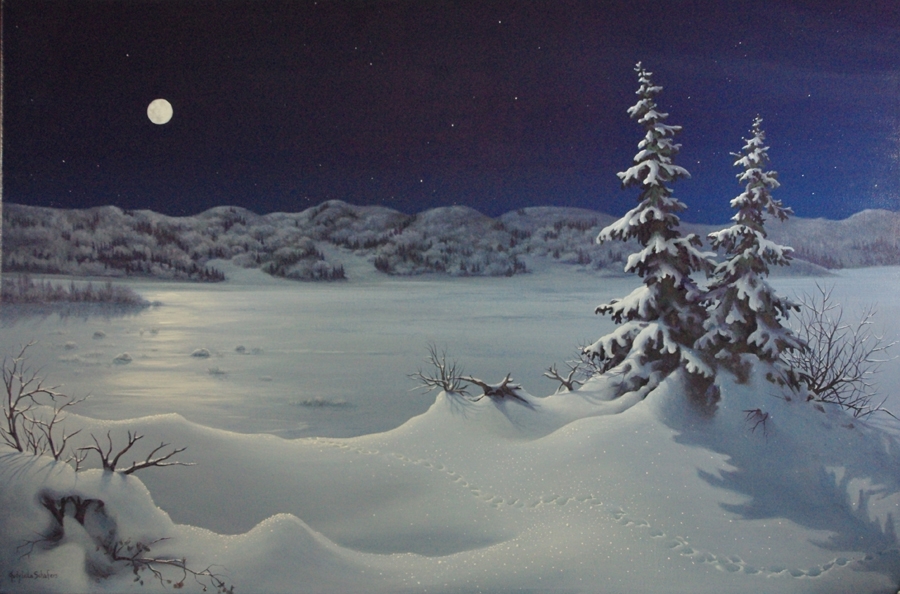 Here is the completed painting just before it was shipped out the door. “Diamonds in the Snow”, 24″ x 36″

The animal tracks were second last to be added in, at my suggestion. They would make the painting more interesting and break up the large empty space on the lower right side. It was a good thing that there was plenty of snow colored paint leftover as quite a few corrections to the tracks had to be made. To create the right mix in order for corrections to become invisible is time consuming because the color shifts as it dries. Once I was satisfied and could not think of a single improvement to make, I proudly added my signature!