As my usual policy for painting landscape commissions goes, the first attempt to paint the image a client has described to me is created on a small canvas. This time, it turns out that two docks are better than one! 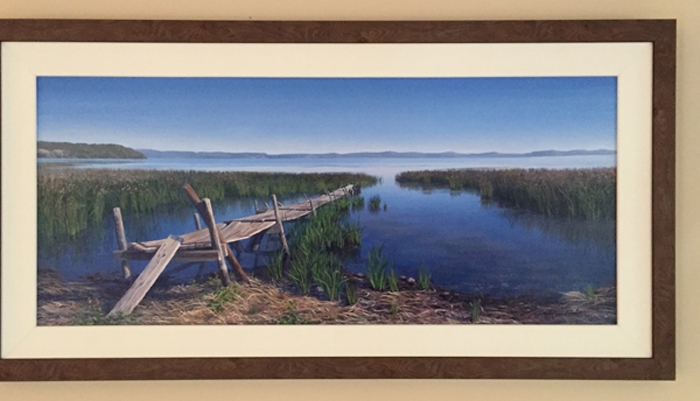 A local couple asked me to paint a scene that was very special to the woman who had spent many summers on the lake where this dock has resides. They presented me with several photos and specific ideas about what the painting should look like. Certain items could be left out and other things emphasized. The overall feeling to be depicted was one of a perfect sunny Alberta summer day, very much like those she enjoyed as a child on her family’s property on Lac La Biche.

I proceeded to paint everything understood and remembered about the image they spoke about. Once the ‘preliminary’ painting was near completion, it was photographed and the image emailed to the client. As usual, a few nerves were involved in waiting to learn what they thought about the preliminary painting. I was pretty happy with it, but wondered: did I interpret correctly according to their vision? Was it at least on the right track? In projects past, sometimes the answer has been a polite ‘no’.

This time, however, the couple were very happy with the first attempt. Since they did not know what size the final painting should be, I showed them a number of blank canvases in the proportion that would suit the composition. They settled on one and soon after, I began the process of re-creating the scene in a much larger format. Once again fooling myself, I thought that this would be fairly straight forward, since most of the difficulties were worked out with the first painting.

A few minor changes to be made on the final canvas required that I move the horizon line nearer to the top than in the first one. The seamless gradation in the sky was quite a challenge as there were no clouds to hide any imperfections and the area to be covered was quite large. The humidity was so low that the paint would dry more quickly than usual. There are at least 15 coats of paint on the sky alone. I only had to paint the horizon line 3 times to get it right….. progress!!

Because the clients loved the colors in the first painting, it was important to recreate them again as closely as possible, which did not come as easily as first thought. Much larger pools of paint had to be mixed and adjusted over and over again because acrylics tend to change color as they dry.  Rocks and reeds were painted in, and then painted out. And then painted in somewhere else. Finally, it felt ready for the couple to take a look at.

Their reaction was heart-warming and a relief for me at the same time. It was important to me that this painting was everything they had envisioned it would be. The lady said the painting brought back many memories of her family and the quiet meditative moments she had spent in company of this old dock. They loved the painting and and felt that it brought them right back to that special place. Their thinking was that two docks are better than one! One for their home and the small one for her office!

2 thoughts on “Two Docks Are Better”