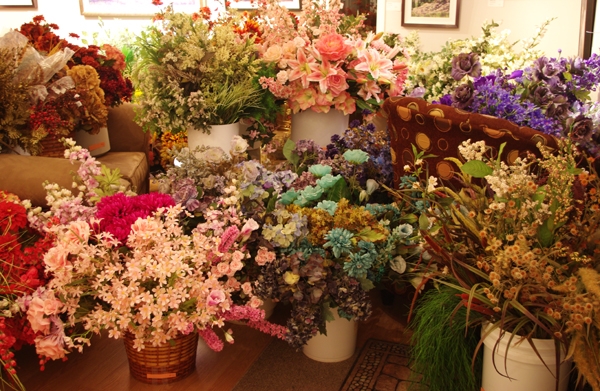 When I would mention to people that I had a basement full of flowers, it was apparent that they could not envision the scenario.  Even I was oblivious to the magnitude of my obsession!

I remember thinking about 25 years ago, what a blast it would be if I could have enough inventory to create any arrangement my imagination could conjure up. There were some niches I could fill in service to others which made this an even more exciting prospect. I began to keep an eye out for deals on good quality flowers everywhere I went.

What great fun it was gathering the items; playing amidst the colors, textures, shapes and ever flowing inspiration!  All of this was useful to my growth as an artist at the same time. I learned a lot about color and design, cultivated the freedom to take chances and try ideas of my own. Hearing people say how much they enjoyed the flower arrangements and “You should open a flower shop”, was very rewarding.

One time after receiving a similar compliment I recall thinking, “Wait a minute. I am becoming more known for these artificial creations than my art. Is that what I really want? ” Something told me that art should be my focus.

I realized that the flowers were a side show taking resources away from my art practise. Over time I noticed that creating the arrangements was becoming less exciting and that there was a limit as to what I could do with them. Conversely,  art was unlimited; a much more vast field of opportunity.

It was time to let the flowers go. This was not as easy as first thought. Every time I looked at them I was inspired! Surprising to me was that this was such an emotional process.

Last year, I decided that enough was enough. I did not want to haul arrangements around any longer and began envisioning the space they occupied for art related things.  What was missing from my original plan from 25 years ago, was an exit strategy!

A year later they are still here and I am faced with an overwhelming sea of fluff. They are currently invading my art studio! Is there a buyer out there  who will  gain as much from them as I did?